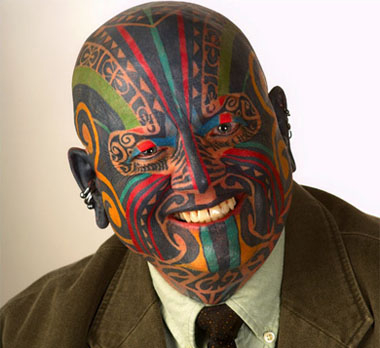 There was once a time in this great nation where tattoos were the main attraction in touring freak shows. Times sure have changed, but some people have not changed their opinion that these displays of body art as being acceptable. Sure, at this moment of your life, as a budding undergrad, Bart Simpson on your forearm might seem like a fantastic idea,  I mean come on, everyone likes the Simpsons; however,  I would recommend that you think about this tattoo for a couple of years. You will probably reconsider it later.

I have no hatred towards tattoos, what you do with your own body is completely your own business.  I only ask that you keep it classy and keep it professional with carefully thought out placement and content. Today, most students see no issues with tattoos but your future employers, the ones who you are working so diligently on your degree to impress, might not be the biggest fans. Some people see tattoos as being dangerous and threatening as stereotypes of motorcycle gangs, sailors, and prisoners have formed.  These stereotypes, however, are based on fact: over eighty percent of people in United States prisons have tattoos; where as only fifteen percent of the free Americans have tattoos.

Having a tattoo is simply a personal matter that is something for you to admire and for your mother to cry about. I ask you, however, to get a tattoo in a classy area and one that you are positive that you won’t regret. I understand that there are many rich and successful people in this world that have tattoos.

Successful people like Mike Tyson, Weezy, Kat Von D, Gucci Mane and The Game all have tattoos on their faces. Sure, this is a place where people will always and forever look at your tattoo, but to a future employer, it is a big mistake. Unless you are absolutely sure that you will make an amazing career out of being a rapper or a tattoo artist, I strongly discourage the facial tattoo. Having one simply says to the general public “this is as far as I want to go in life.” It probably hurts oh so bad too.

If you are going to get some ink, stop and think about the way that you are displaying yourself. Is this something that you will like forever, or is it just a fad? Is your tattoo going to be located in an area of your body that is easily concealed from your parents or future employers? These things really matter to the outside world so they should matter to you as a member of this society, whether you like the common perceptions of them or not.